Down to a Soundless Sea 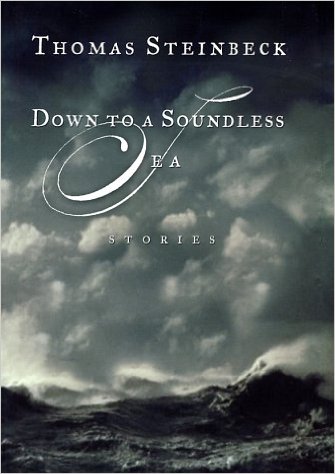 Here is an unprecedented fiction debut that is cause for celebration. Growing up in a family that valued the art of storytelling and the power of oral history, Thomas Steinbeck now follows in his father’s footsteps with a brilliant story collection. Down to a Soundless Sea resonates with the rich history and culture of California, recalling vivid details of life in Monterey County from the turn of the century through the 1930’s. Steinbeck accomplishes an amazing feat: his stories have the feel of classic literature, but his haunting voice forceful narrative drive, and dazzling imagery are unmistakably his own.

In seven stories, Steinbeck traces the fates and dreams of an eccentric cast of characters, from sailors and ranchers, to doctors and immigrants, as each struggles to carve out a living in the often inhospitable environment of rocky cliffs, crashing surf, and rough patches of land along the California coast and the Big Sur. In Blind Luck, a wayward orphan finds his calling at sea, only to learn that life must concede to the whims of authority and the ravages of nature. In Dark Watcher, with the country at the start of the Great Depression, a professor craves a plausible discovery to boost his academic standing and encounters the Indian myth of a shadowed horseman that may ruin his career. An Unbecoming Grace tracks the route of a country physician who cares for an ill-tempered cur but feels more concern for the well-being of the patient’s beleaguered young wife. The collection concludes with Sing Fat and the Imperial Duchess of Woo, a novella that follows the tragic love story between a young apothecary and the woman he hopes to marry.

Deeply felt and richly imagined, full of compelling drama and historical authenticity, Down to a Soundless Sea heralds the arrival of a bold new voice in fiction. Thomas Steinbeck has written stories as memorable and rugged as the coastline that inspired them.

“Thomas Steinbeck writes with grace, authority, and passion. If John Steinbeck were my father, I would not have the courage to write a laundry list or letter to the editor. But Thomas Steinbeck inherited his father’s great love of story. It is a grand thing to have a Steinbeck back in American letters.”

“These seven gemlike stories, written in careful, hyperobservant prose, give us California’s Monterey Peninsula in its early days—a time when prospectors, immigrants, Native Americans, ranchers and adventurers all contended with the dangerous, if beautiful, land. The author, son of legendary writer John Steinbeck, shares with his trailblazing father an empathy for strugglers, for life’s long sufferers who prevail through courage or die trying. These days, this is almost antique writing—shorn of irony, word gaming or flash—and it’s more than welcome. As Steinbeck explains in an author’s note that’s also a fond reminiscence of his family’s storytelling tradition, he aims to recapture not only the sensibilities of his nineteenth-century protagonists, but also their language—a kind of formality that heightens the atmosphere of these tales. From “The Night Guide,” a story of a child hero, to “Sing Fat and the Imperial Duchess of Woo,” an Eastern love story set in the Wild West, this collection is a remarkable debut. Steinbeck is now at work on a novel; the form’s larger canvas should give him even more room to excel.”