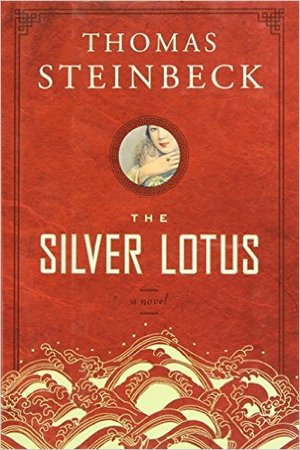 American merchant Captain Jeremiah Macy Hammond is at the forefront of the New World. His trading empire faces pirates, violent storms and illness as it forges new paths across the Pacific Ocean, opening new markets in Hawaii, Mexico, and China. Yet it is there he meets the beautiful Lady Yee, the Silver Lotus, prized daughter of a wealthy Cantonese merchant family. A great love is born and their adventures will shape their lives; their love will transcend borders, oceans, cultures; and their marriage will eventually serve as a foundation for the growth and development of the Northern California coast.

Steeped in the rich culture of the Orient and set against the burgeoning trading routes of the Pacific Rim, “The Silver Lotus” presents Steinbeck’s most moving and textured narrative to date. Readers of both Lisa See and Patrick O’Brien will be drawn to this rich historical tapestry that examines how industry, adventure, and love served as the building blocks of the thriving California waterfront.

“The oldest son of Nobel laureate John, former Vietnam photographer Steinbeck writes a sturdy historical with a heavy dose of romance for his second novel (after In the Shadow of the Cypress). In 1896 Capt. Jeremiah Macy Hammond, a descendant of Nantucket whalers, sails to China and falls in love with Lady “Silver Lotus” Yee, the “luminous” daughter of an affluent Cantonese grain merchant. Breaking with Chinese tradition, Lady Yee marries the “barbarian sea captain,” and they share rousing maritime adventures as trade merchants aboard one of Hammond’s schooners, The Silver Lotus. By 1900 they retire to a manor house in Monterey, Calif., where Lady Yee gives birth to a daughter, Macy. The low-profile but ambitious Lady Yee takes an avid interest in the welfare of oppressed Chinese laborers and bears another child, a son they call Silver. Tragedy finally catches up to the privileged family after a prolonged stay in China with Lady Yee’s family, threatening to destroy their fairy tale life. Though Steinbeck eschews direct dialogue and scene-setting in favor of straightforward exposition, plentiful historical details, vibrant descriptions, and a strong protagonist in the indomitable Lady Yee give his narrative great emotional depth.”

From Jennifer Funk, The Library Journal:

“Steinbeck, son of the Nobel laureate, brings high-sea adventure to life in this historical novel set in the late 1800s. Captain Hammond is a dashing, wealthy American master of a profitable trading ship. After rescuing an influential Chinese merchant and his family, Hammond wins the love of the merchant’s daughter—the beautiful, intelligent Silver Lotus. Thus starts a tale of love and generosity unsurpassed. Where Romeo and Juliet had a selfish, inward love, the Silver Lotus and Hammond outwardly express their love through compassion toward others. Steinbeck intricately details their lives together and the Silver Lotus’s unique intellect and uncanny perception. VERDICT Embracing romance, coming-of-age, adventure, and historical fiction, this novel will easily delight fans of these genres. It will also appeal to American literature lovers and loyal readers of the venerable John Steinbeck.”